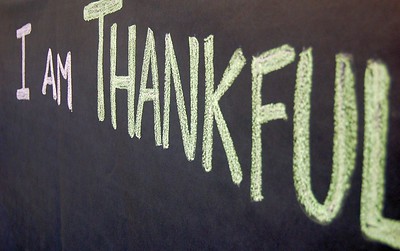 “Being thankful turns what we have into enough.”

We serve a mighty God; He keeps us saved and we are thankful to Him for this.  Today we will look at what the Bible says about being thankful and how important it is for us as God’s children.  Did you know that God wants us to be thankful in everything?  God has called us as His people to always be thankful.  Here in America, in 1863 we had a president that adopted a day for giving thanks.  Can you imagine people in the American government felt it was important to appoint a day called Thanksgiving?  But celebrating the practice of giving thanks once a year is just not enough.

God Wants us to be Thankful All the Time.

This scripture is informing us that whatever we do, we need to give thanks to God and do it in the name of the Lord.  The Bible is full of scriptures that challenge and encourage us to be a thankful people.  Psalms teaches us to come before his presence with thanksgiving.

“Enter into his gates with thanksgiving, and into his courts with praise: be thankful unto him, and bless his name.

There are many scriptures in the Bible instructing us to be thankful.”

“And let the peace of God rule in your hearts, to the which also ye are called in one body; and be ye thankful.”

“6 But godliness with contentment is great gain.

7 For we brought nothing into this world, and it is certain we can carry nothing out.

8 And having food and raiment let us be therewith content.

9 But they that will be rich fall into temptation and a snare, and into many foolish and hurtful lusts, which drown men in destruction and perdition.

10 For the love of money is the root of all evil: which while some coveted after, they have erred from the faith, and pierced themselves through with many sorrows.”

Paul let Timothy know that Godliness with contentment is great gain.  Did you know it is impossible to be unthankful if you are content with the things, you already have?  On the other hand, if you are unthankful, it is impossible to be content.  Discontentment comes when we hear the subtle whisper of more.  The whisper of I want, I want, I want, becomes louder, and louder, and louder until it takes over our lives.  That is why the Bible teaches us having food and raiment or clothing with this be content.  God wants us to be thankful for what He has already provided.

Be Thankful for What is Given to You!

“11 And it came to pass, as he went to Jerusalem, that he passed through the midst of Samaria and Galilee.

12 And as he entered into a certain village, there met him ten men that were lepers, which stood afar off:

13 And they lifted up their voices, and said, Jesus, Master, have mercy on us.

14 And when he saw them, he said unto them, Go shew yourselves unto the priests. And it came to pass, that, as they went, they were cleansed.

15 And one of them, when he saw that he was healed, turned back, and with a loud voice glorified God,

16 And fell down on his face at his feet, giving him thanks: and he was a Samaritan.

17 And Jesus answering said, Were there not ten cleansed? but where are the nine?

18 There are not found that returned to give glory to God, save this stranger.”

In Bible times lepers were not allowed within the city nor were they allowed to have contact with anyone.  The 10 lepers heard that Jesus had power to heal and asked Him for mercy on their condition.  Jesus gave them specific instructions to go and show themselves to the priest.  The leapers acted by faith doing exactly what Jesus told them and were miraculously healed.  Jesus did the healing as He said He would but only one of the 10 lepers came back to say thank you.  Jesus was aware of the absence of the other nine men.  He was glad one had returned but He also noticed the other nine neglected to say thank you.  Just like the 10 lepers, we are often recipients of God’s good gifts.  Maybe God answers our prayers, maybe He heals us, maybe He provides food for us, maybe He provides transportation, but I am afraid that too often we are like the nine lepers.  We take our gifts from Jesus for granted and we run off without remembering to say thank you.  We may be doing all God wants us to do, and following Jesus instructions just as He shows us, but if we are not thankful, we become just like the nine lepers who did not take time to show appreciation for what God did.  Remember to be thankful for what is given to you.  God wants His young people to be thankful for what others do for us.  This means be thankful for your mom and dad and what they do.  Also, be thankful to others and what they do for you too, maybe someone is able to give you a ride to a place you need to go, make sure you tell them thank you.

Be Thankful for Where You Are at in Life!

“19 And when her masters saw that the hope of their gains was gone, they caught Paul and Silas, and drew them into the marketplace unto the rulers,

20 And brought them to the magistrates, saying, These men, being Jews, do exceedingly trouble our city,

21 And teach customs, which are not lawful for us to receive, neither to observe, being Romans.

22 And the multitude rose up together against them: and the magistrates rent off their clothes, and commanded to beat them.

23 And when they had laid many stripes upon them, they cast them into prison, charging the jailor to keep them safely:

24 Who, having received such a charge, thrust them into the inner prison, and made their feet fast in the stocks.

25 And at midnight Paul and Silas prayed, and sang praises unto God: and the prisoners heard them.

26 And suddenly there was a great earthquake, so that the foundations of the prison were shaken: and immediately all the doors were opened, and every one’s bands were loosed.”

Paul and Silas were thrown into prison for teaching God’s word.  The two were beat by the magistrates and then their ankles were bound in wooden stocks.  Paul and Silas were in a difficult situation and more than likely also in a lot of pain.  Interesting enough, at midnight Paul and Silas began to pray and sing praises to God.  It did not matter to them that they were in prison.  Paul and Silas were going to give God praise.  Then God sent an earthquake and Paul, and Silas were released from Jail.  Are you known as the one that is thankful no matter what situation you are in or are you known as the grouch?  Are you the one that is always complaining that no one can do anything right for you?  I will let you in on a secret, if you are the complainer and the grouch, no one probably wants to be around you.  People love to be with people who are thankful.

The devil wants to come into our lives and give us the “if only” disease.  If only I could make better grades.  If only my parents were rich.  If only I didn’t have to share with my brother.  If only we had a nicer home.  If only I had a different family.  The list can go on and on becoming endless.  The devil wants us to look at life through the lens of “if only” I had more, and I want, I want, I want. The solution to the “If only” disease is being thankful for the things you already have.  God wants us to be thankful.  That is God’s challenge to us.  Did you know that thankfulness rarely has anything to do with a person’s financial status?  Having lots of money and owning many things does not make people thankful.  I know many people with little money, but they are very thankful people, and I know people with much money that are very unthankful.  I am convinced, if you become thankful for what God has given to you already, everything will suddenly seem better, and you will be surprisingly happier.

The author of the song, “It is Well With My Soul” Horatio Spafford, lived in the US, in the city of Chicago, with his wife and five children.  Unfortunately, their son died from pneumonia.  The same year their son died Mr. Spafford also lost his successful business.  Then a few years later his wife and daughters were on a ship to Europe.  The ship unfortunately collided with another ship and his daughters died in the accident.  When Mr. Spafford heard the devastating news, he took a ship to meet with his wife and mourn his daughters passing.  It was then he penned the famous lyrics to the hymn “It is Well With My Soul”.

When peace like a river attendeth my way
When sorrows like sea billows roll
Whatever my lot, Thou hast taught me to say
It is well, it is well with my soul

Though Satan should buffet, though trials should come
Let this blest assurance control
That Christ (yes, He has) has regarded my helpless estate
And has shed His own blood for my soul

My sin, oh the bliss of this glorious thought (a thought)
My sin, not in part, but the whole (every bit, every bit, all of it)
Is nailed to the cross, and I bear it no more (yes!)
Praise the Lord, praise the Lord, O my soul!

And Lord, haste the day when my faith shall be sight
The clouds be rolled back as a scroll
The trump shall resound, and the Lord shall descend
Even so, it is well with my soul!

God wants us to be thankful.  I will leave you with one scripture to close:

My challenge to each one of you is to be thankful for what you have.  God is calling His people to be a thankful people.