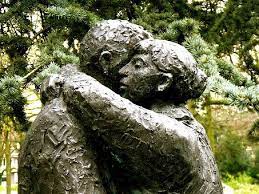 9. Made direct amends to such people wherever possible, except when to do so would injure them or others.

“Again when I say unto the wicked, Thou shalt surely die; if he turn from his sin, and do that which is lawful and right; If the wicked restore the pledge, give again that he had robbed, walk in the statutes of life, without committing iniquity; he shall surely live, he shall not die. None of his sins that he hath committed shall be mentioned unto him: he hath done that which is lawful and right; he shall surely live.” ~ Ezekiel 33:14-1

Yes, confession and restitution is an important part of the Gospel, and of our healing. Forgiveness from others helps to bring about closure and healing for both them and us!

In the Old Testament Jacob stole the birthright from Esau. And because of this Esau was very bitter, and wanted to kill his brother. And so Jacob fled into another country. After many years Jacob returned, and he knew he was going to have to humble himself and face his brother to seek forgiveness. And so he did so in an ancient tradition of complete humility before his brother.

“And he passed over before them, and bowed himself to the ground seven times, until he came near to his brother. And Esau ran to meet him, and embraced him, and fell on his neck, and kissed him: and they wept.” ~ Genesis 33:3-4

There was great healing on that day! Something that had grieved the hearts for many years, was now resolved. There was closure of this issue between these two brothers.

If we have been an addict for a number of years, then we tend to develop a mistrust at the same time for other people. And so this step of seeking forgiveness, will also take courage. Because we are going to have to humble ourselves, and overstep this mistrust. Otherwise we won’t seek for reconciliation. This is going to have to be about doing the right thing, more than protecting ourselves.

And so we now take the list that we developed in Step 8: Accountability, and we start to put action behind our accountability. We begin to work on our list, one by one, until we have completed asking each one for forgiveness, and have repaid those that we owe. And depending on each situation, it may take us a long time to fully complete this Step 9. But still let us be faithful to complete it.

“Restore, I pray you, to them, even this day, their lands, their vineyards, their oliveyards, and their houses, also the hundredth part of the money, and of the corn, the wine, and the oil, that ye exact of them. Then said they, We will restore them, and will require nothing of them; so will we do as thou sayest. Then I called the priests, and took an oath of them, that they should do according to this promise.” ~ Nehemiah 5:11-12

We Need Wisdom in Seeking Reconciliation

But at the same time, the Gospel also teaches us that we need to exercise wisdom concerning past wrongs that we may have committed. Sometimes it is best that certain sins stay hidden forever, away from the people who would be deeply hurt by the knowledge of that sin.

“Men do not despise a thief, if he steal to satisfy his soul when he is hungry; But if he be found, he shall restore sevenfold; he shall give all the substance of his house. But whoso committeth adultery with a woman lacketh understanding: he that doeth it destroyeth his own soul. A wound and dishonour shall he get; and his reproach shall not be wiped away. For jealousy is the rage of a man: therefore he will not spare in the day of vengeance. He will not regard any ransom; neither will he rest content, though thou givest many gifts.” ~ Proverbs 6:30-35

Why does the scripture describe it this way? Because of the deep hurt that can be caused by such a sin against a man and his relationship with his wife. It can cause a very deep and unbearable emotional pain. If this sin has happened, but yet it has been hid from the one that it would hurt the most, it is best that it be left hid from them forever if possible.

Some sins we may have committed, may be worthy of a punishment under the law. Therefore it is best that we get wise counsel before we would try to make this particular wrong right. Handling something in a wrong way, could bring about a much more severe penalty upon ourselves, if it ever was brought before a Judge of the court.

Even Jesus warned us about allowing things to come up before a judge. And so he recommended we try to resolve it without a judge.

“Agree with thine adversary quickly, whiles thou art in the way with him; lest at any time the adversary deliver thee to the judge, and the judge deliver thee to the officer, and thou be cast into prison. Verily I say unto thee, Thou shalt by no means come out thence, till thou hast paid the uttermost farthing.” ~ Matthew 5:25-26

Get wise advice on how to go about taking care of our past wrongs. You will be glad you did.

We Must Also Forgive Ourselves

And finally, there is one last person that we need to seek forgiveness from. That is ourselves. We must be willing to forgive ourselves, so that our past can be fully resolved in our heart and our mind.

“Brethren, I count not myself to have apprehended: but this one thing I do, forgetting those things which are behind, and reaching forth unto those things which are before, I press toward the mark for the prize of the high calling of God in Christ Jesus. Let us therefore, as many as be perfect, be thus minded: and if in any thing ye be otherwise minded, God shall reveal even this unto you.” ~ Philippians 3:13-15

The better word for “perfect” in the scripture above is: mature. And maturity especially speaks to taking responsibility to resolve past wrongs, so we can be reconciled. And when they have all been resolved, we must be mature enough to accept the resolution, so that we can move on in life.

And so the next step, which is Step 10, is titled: “Accepting Responsibility.”