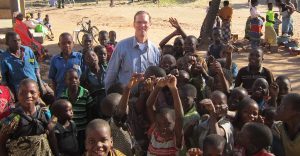 Richard Lehman was saved while in his college years, and was established under a faithful and strong gospel message that teaches deliverance from sin and all hypocrisy. And then after a number of years, Richard was called to the ministry and he taught for twenty years an adult Bible study class. This experience would prove important later, as the Lord would call him to write Gospel doctrinal articles.

As the internet and the web came into full use, he began publishing the gospel message on the web, including a detailed series on the book of Revelation. He’s writings were noticed by different ones in various places, and eventually the call came for him to visit Africa. These visits connected him with a number of ministers, first in Kenya, then in Malawi and Mozambique, and then even later in Tanzania.

A regular weekly phone conference line was set up, and many local congregations in Africa would eventually come to connect to listen and learn. Many brothers in Kenya were instrumental in enabling these regular meetings, in particular of mention is brother Benaiah who would coordinate many of the arrangements, and then also provide translation into KiSwahili (and also into KiKamba when it was felt necessary). Additionally, it was necessary to publish these lessons (at truebibledoctrine.org) because of the need for more formal doctrinal teachings for the ministers in Africa to study from.

And then still later, Ross and Becky Tolbert would also help in this African ministry as they were invited to teach the young people there via the same phone conferencing service, in separate meetings every Saturday morning. And so they also have published their young people focused lessons at truebibledoctrine.org.

And so this is a compilation of articles that have already been published. May the Lord bless the reader with both understanding, and a greater heart-felt purpose for the spreading of the true Gospel of Jesus Christ!