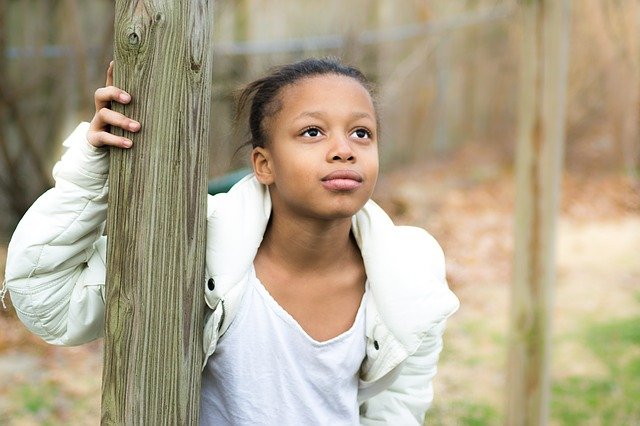 There is something about being young that’s special.  It doesn’t matter if you’re too tall or a little plump, or maybe you have a few blemishes; there is a natural beauty that comes with simply being young.  Young people and children are beautiful not just because of their youth but also because of the childlike hope that God puts within them. It’s a natural occurrence part of being a child.  And it doesn’t seem to matter how bad a child’s situation might be; somehow, that childlike hope for a bright future manages to always shine from within.

When I was a little girl, I grew up in a small town in California.  There were a lot of kids in our neighborhood.  I mostly played with the little girl across the street, and sometimes life was hard for both of us.  Our families did not know God personally, and we know that sin has a way of spoiling what could be good.  Thankfully my parents worked hard to make sure that my brothers and I had the things we needed.  Our clothes weren’t always new, and we ate a lot of rice and beans, but they kept us healthy and safe, and I respect and love them for that.

Young people and children, if your parents or guardians, meaning the persons who have assumed responsibility for you, are doing their best to care for your needs and love you, respect and love them for their efforts.  Even if situations aren’t perfect all the time, say thank you and offer to help when needed.  Helping is one way you can show that you appreciate what they do for you.

My little friend and her brothers were not as fortunate as I.  Her mom and dad earned more money than mine, but they spent all they had on the party life.  So my friend and her brothers didn’t always have food and clothing as they needed, and the other kids in the neighborhood made fun of them.  But I do remember, despite the bullying, my little friend still had hope for a better day to come.  She possessed the childlike hope God gives to every child, and her circumstance couldn’t take that away.  You could see it in her face, and you could hear it in her voice when we played together.  I had it too, of course!  All children have it!  That childlike hope that dreams of a future yet to come.  We would say things like,

“You know what I wanna be when I grow up?  A teacher!” “I’m gonna have a big family with ten kids!”

Childlike hope is the unique gift God gives to all children and young people, and God has a special message for you that possess that hope.

“12 Remember now thy Creator in the days of thy youth, while the evil days come not, nor the years draw nigh, when thou shalt say, I have no pleasure in them;

Young people and children, this message is for you.  Our great God inspired the Ecclesiastes writer to record these words for you who are young.  But what does the writer mean by the evil day?  God wants you to turn to Him before the cares of life begin to weigh you down.  As we mature in life, our responsibilities also grow with every choice we make for our future, and God wants to be a part of our choices.  He has a plan for your life.  Jesus wants you to turn to Him before your bodies are no longer strong and healthy.  He also wants your heart before sin destroys the childlike hope God gave to you–the hope that dreams of a promising future.  In essence, young people, God is saying, remember me before you make decisions that leave scars on your mind and heart.  In some cases, memories of the mind and pain in the heart caused by sin can weigh heavy long after repentance.  The choice to sin will destroy God’s gift of childlike hope.

Let’s look at an example of a  young man who had an ear to hear God while he was young. This account in the Bible starts as a story about a young wife named Hannah who could not have children.  Eventually, God gave Hannah her first son, and she promised God that when he was old enough, she would take him to the temple to live in God’s employ.  Meaning Samuel, Hannah’s son, would do work around the temple as needed.  So the time finally came, and young Samuel’s father left him in the care of the high priest named Eli.

Eli had two sons of his own.  And his sons also worked in the temple, preparing the Lord’s sacrifices from the people.  But there was a huge problem.  Eli’s sons were wicked, and they continually disobeyed the laws of sacrifice in the temple.  God was unhappy with Eli because it was Eli’s responsibility to correct his sons and properly care for the laws of sacrifice.  So a man of God came to Eli with a message that came directly from God.

29 Why do you kick at My sacrifice and My offering which I have commanded in My dwelling place, and honor your sons more than Me, to make yourselves fat with the best of all the offerings of Israel My people?’

Eli and his sons were stealing from God by taking the best part of the sacrifice for themselves.  God was angry and told Eli, Eli, there will be consequences if you and your sons continue this.  Now, remember Samuel, the young boy in the temple? He was different from the moment his father Elkanah brought him to Eli.  Samuel ministered to the Lord, and his testimony continued on this way.

18 But Samuel ministered before the Lord, even as a child, wearing a linen ephod.

So you see, young people, you don’t have to be old to be good workers for God.  As Samuel matured and ministered before the Lord, God grew more disappointed with Eli and his sons.  But God would send Eli another warning, and the message would come from someone in his own household.

One night as young Samuel slept in his bed, he heard his name called —Samuel, Samuel.  Here am I, Samuel said as he ran to Eli; you called?  Eli responded and said, I didn’t call you Samuel. Go and lay down.  So Samuel being obedient, did as Eli told him. Then he heard his name again, Samuel.  So again, Samuel went to Eli and said Here I am Eli because you did call me, and Eli told him again, Samuel, lay down.  I am not calling you.  You see, before this happened, Samuel didn’t understand God or know what it was like to hear His voice.  So Samuel didn’t realize it was God speaking to him all along.  But his heart was of such purity and full of such childlike hope that he had an ear to hear God’s voice.

“7(Now Samuel did not yet know the Lord, nor was the word of the Lord yet revealed to him.)”

This scenario would happen three times before Eli finally recognized it was the Lord calling Samuel.

“8 And the Lord called Samuel again the third time. So he arose and went to Eli, and said, “Here I am, for you did call me.” Then Eli perceived that the Lord had called the boy.”

So Eli told Samuel on the third time, go and lie down and when you hear your name say, Speak Lord for thy servant hears thee. So Samuel did what Eli instructed, and the Lord came before Samuel and spoke with him about Eli, his sons, and the future of Israel.  Then Eli asked Samuel what God had said, and Samuel felt afraid to tell Eli what God had said, but Samuel was obedient anyway and told Eli all God had said.

So we’ve learned that Samuel had an ear to hear God’s voice even as s a child who did not yet understand God.  He possessed childlike hope not yet spoiled by the cares of life or the burden of sin. Young people, did you know that God wants to speak to this hope within you?  He has a plan for your life. Hope for a promising future to come.

For I know the thoughts that I think toward you, saith the Lord, thoughts of peace, and not of evil, to give you an expected end.

This scripture is how God thinks of you, thoughts of peace with an expected end.  God has a good plan for you.  Do you know that Samuel never left God?  Even as he became a man, Samuel continued faithful to God, and God gave him a family and made him a prophet of the Lord.  When Samuel went through hard times, as we all do, God was with him to encourage him every step of the way.

God wants to be with you, too, from your youth into your older years. So remember God while you are young and give your heart to Him today.