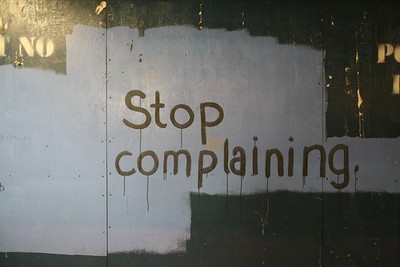 So I would like to talk about the Israelite people and what happened when they complained.

“14 Do all things without murmurings and disputings:”

The Philippian writer must have been talking to people who complained a lot.  So he challenged them and said we needed to do everything without murmuring and complaining.  I want to walk you through a story in the Bible about the Israelite people so I can share with you what happened in the Old Testament.  But I see this same thing happening all around us today as well.

A long time ago in Egypt, the Israelites were enslaved for quite some time.  They prayed with groanings to God, asking for His help.  God heard their groanings and prayers, and with compassion, He remembered their situation and sent someone to help them.  And we know the person that came to help the Israelite people at this time was Moses.  By the time Moses arrived in Egypt, the Egyptians had kept the Israelite people as slaves for over 400 years.  Moses went before the king and demanded he free the Israelites, but it wasn’t until after God sent the plagues that the king finally let them go.  When the Israelites left, God was faithful to care for them.  In fact, the Bible tells about some incredible things that happened as God watched over them.

“21 And the Lord went before them by day in a pillar of a cloud, to lead them the way; and by night in a pillar of fire, to give them light; to go by day and night:”

What an amazing thing to happen to the people!  Recently freed from slavery in Egypt for over 400 years, God personally Guided them with a pillar of fire at night and a cloud in the day, showing them where to go!  They were on their way to the promised land of freedom.  But the king changed his mind, and he sent his soldiers to bring them back.  The chariots of angry soldiers quickly persued the Israelites when the Israelites came upon the Red Sea.  The Israelites found themselves trapped with the soldiers behind and the sea before them!  God had cared for them all the way to the Red Sea.  The Israelites were aware of God’s presence in the cloud and the pillar of fire, but something happened with the people.

God had just saved them from slavery and led them to freedom when they met this obstacle, and what do they do instead of trusting God?  They complained!  Moses encouraged them and told them to fear not; the Lord is with us and will help us.  And God did help them parting the sea for the Israelites to cross and closing the waters as the Egyptians came upon them.  The Israelite people were happy for a while after that, and then they came upon a place with bitter water.  Then the Israelites began to complain again!

24 And the people murmured against Moses, saying, What shall we drink?

The Israelites finally arrived in Mt. Siania, where God first called Moses to free the Israelites, and later God would give Moses the ten commandments.  As the Israelites settled, Moses went up to the mountain to commune with God, and when he did not return, the people became impatient.  They were dissatisfied with the true God that had freed them from Egypt and cared for all their needs as they traveled.  So the Israelites persuaded Aaron to make them a God, saying Moses is gone and is not returning; make us a God so we may worship!  God had been patient with the grumbling and complaining from the Israelites.  But when God found out the people made another God, He became angry, and Moses had to intercede.

What a sad situation that complaining had become a way of life for the Israelites.  They didn’t trust God to continue providing food and water.  They thought they knew better than God what was good for their lives.

“11 And when the people complained, it displeased the Lord: and the Lord heard it, and his anger was kindled; and the fire of the Lord burnt among them, and consumed them that were in the uttermost parts of the camp.”

There finally came a time when God said that’s enough!  I am tired of hearing them complain!  The Israelites’ behavior kindled God’s wrath toward them.  Still, Moses didn’t give up and prayed to God on their behalf.  God heard Moses’s prayer, and His anger passed.

After these events, the Israelites continued their journey for many more months.  But it wasn’t long until they started to complain again.  This time they complained about the special food God sent them.  They were tired of eating the same food from God every day.  The Bible teaches us they desired fish, meat, garlic, cucumbers, leeks, and melon.  God sent so much food down for two days that it covered the earth!  So the people gathered the food and gorged themselves continually during that time, and God became unhappy with them because of their greed and selfishness.  So He decided to afflict the Israelites with a plague.

As we continue to move through the story, we learn that the Israelite people finally arrived at their destination—the promised land given to them by God.  So Moses sent twelve spies to look at the land.  Ten of the twelve came back and said it was impossible to take the land because of the giants, while the two others said, but we can take the land, and the fruit there is good.  These two men who trusted God’s ability to help them were Joshua and Caleb.  But because of the Israelites’ doubt, God denied them all the opportunity to enter the land He promised them.  So the Israelite people wandered in the wilderness for forty years until the unbelieving and complaining generation died off.

My question for you is, what have you complained about today?  What about yesterday?  Or last week?  Did complaining make the situation any better?  As we look around us, we can see God in everything.  But as humans, we sometimes tend to complain when we don’t get what we think we want.  Notice in the journey of the Israelites, each time they complained and God supplied their need, but every time it became easier for them to complain, and they could not see God’s power.  Complaining stops the work of the Holy Spirit.  God blesses us with everything we need, so when we decide to complain because we don’t get what we want, that stops God’s work in our lives.  As the human race, I am surprised at all the things we find to complain about, our government, school teachers, and the food.  People see something to complain about all the time.  We hear it all around us.

This morning I challenge you to think first; because complaining doesn’t solve anything.  Complaining is negative; it puts us in a poor state of mind and then blocks God’s power in our lives.  Because the Israelite people complained, they wandered in the wilderness for forty years and could never enter the land promised to them by God.

Similarly, God has plans for your life and my life too.  So we can move ahead and take God’s plan or sit around and complain.  If we choose to complain, we will only delay receiving what God wants to have or might never get to where God wants us to be.  The choice is ours.  Will we complain or be thankful and trust God for what He gives and does for us?

Remember Philippians 2:14, and do all things without murmurings and disputings.  I challenge you this morning not to let murmuring and complaining take over your life.  Trust in God and be thankful for what He does for you every day.