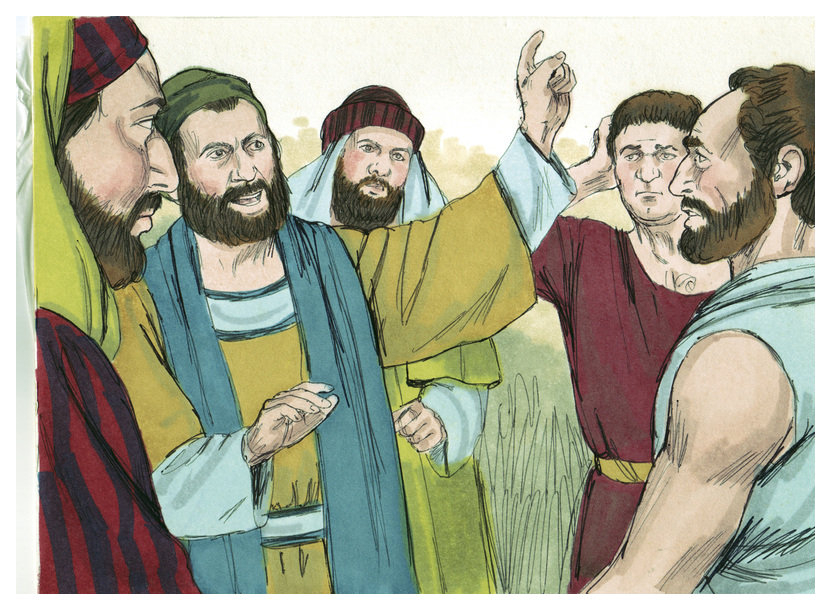 If you do, I sincerely would like to talk to you about it. I would like to ask you where, when, and how it took place, and what special blessings came out of it?

By the way, the only examples given to us in the Bible for a ministers meeting are found in Acts 2, Acts 15 and Acts 20. Of the three: Acts 15 gives us the insights into how to conduct a serious discussion of confrontational issues, and still be able to allow the Holy Spirit to resolve them.

The end result of the minister meeting in Acts 15: Christian Jews observing 600+ tenants of the law, and Christian gentiles following almost none of the Mosaic law yet following Christ: and they all stayed in fellowship! Amazing! Are we willing to allow the Holy Spirit to do the same today?

So (1) how did the Apostles and disciples come to such a strange conclusion and arrangement, and (2) what was the difference that made it work?

(1) How did the Apostles and disciples come to such a strange conclusion and arrangement?

In Acts 15 the ministers meeting started out being conducted the way they usually do today. Ministers searched the scriptures for teachings to justify what they felt the “right” position should be on the issue. The reality was that at that time none of the New Testament was written yet, so their record of the Word of God was based on:

None of these things taught in a clear literal way that gentiles would not have to follow the law. In fact just the opposite: they said they must follow the law. For even Jesus had taught:

“Think not that I am come to destroy the law, or the prophets: I am not come to destroy, but to fulfil. For verily I say unto you, Till heaven and earth pass, one jot or one tittle shall in no wise pass from the law, till all be fulfilled. Whosoever therefore shall break one of these least commandments, and shall teach men so, he shall be called the least in the kingdom of heaven: but whosoever shall do and teach them , the same shall be called great in the kingdom of heaven.” ~ Matthew 5:17-19

You say “he meant for the law to be fulfilled in Christ, so we don’t need it.” You say that because you have the benefit of the whole New Testament. They did not, nor did they “get it” because for many years (roughly 15) after the day of Pentecost they still practiced the law and sincerely believed the gentiles must also.

Jesus did not explicitly deal with the issue. He taught a principle that only the Holy Ghost could later enlighten them on. But it would be at the right time, and when they were ready, and needed it.

“I have yet many things to say unto you, but ye cannot bear them now. Howbeit when he, the Spirit of truth, is come, he will guide you into all truth: for he shall not speak of himself; but whatsoever he shall hear, that shall he speak: and he will shew you things to come.” ~ John 16:12-13

So, how did the Holy Ghost enlighten them on this principle, and how was it presented to them in the Acts 15 minister meeting?

After much arguing about the will of God and the scriptures, Peter finally stood up and essentially said: “let me tell you what the Holy Ghost did in the lives of people who don’t follow the Mosaic law.”

First of all, all the Apostles and disciples listened intently because everyone cared very much about obeying the Holy Spirit, and to learn from him by allowing him to work as he pleased.

Have we become afraid to ask what the Holy Ghost is doing because of so many fake “Pentecostal” spirits have deceived people today?

Do we care as much about what the Holy Spirit is doing in people’s lives today? If so, do we ever inquire about how the Holy Ghost is working in people’s lives when a dispute about “what is allowed or should not be allowed” comes up in a meeting? Or do we believe the Holy Ghost has been absent from working in the saint’s lives for so long that we can only rely on our own personal understanding of scripture? I think the Holy Ghost is working in many different saints throughout the world, but we often are not willing to pay attention when it is different from our expectation!

The Holy Ghost has already expressed his opinion many times, and about many issues throughout history: through his holy work in people. Anyone care to listen and learn?

Does anyone know of a minister who has spoken like Peter in a minister meeting? A minister who testified how the Holy Spirit used people who live sin free, but yet they understood a teaching or held a standard different than the rest of us. If so, did the rest of the ministers listen intently to learn more about what the Holy Spirit was doing, like they did in Acts 15? Please let me know, if you know of any such meeting! I really want to know!

The interesting thing is that the Holy Spirit was working through both those who followed the Mosaic law, and those who didn’t. Isn’t that so strange? Or is it? Isn’t that what the Apostle Paul was speaking about when he wrote in 1 Corinthians 12:4-7

Do we favor a minister with more gifts than another, or that has a gift we are more used to? Or should we treat all true ministers with the same respect?

Do we allow for differences in the administration of the gospel between the different local congregations?

Can we operate (like the Jews and the gentiles) drastically different and still be in fellowship?

Could we still fellowship another minister if their understanding of doctrine is not as clear as we believe ours is, even though they are doing their best to live obedient and holy? Or do we cut them off because we have adopted a new identity: “the fellowship of perfect understanding?”

There is an old song that goes like this:

“We reach our hands in fellowship to every blood washed one. While love entwines around each heart in which God’s will is done!”

This raises some perplexing questions for us today:

(2) What was the difference that made it work?

But it took more than Peter’s declaration of what the Holy Spirit did to bring the Jews and gentiles into Christian fellowship. It took the pastor of the Jews, whose flock was potentially going to suffer the most persecution for it, to publicly stand up for the Holy Spirit’s will! This is why James had to boldly stand up and speak!

“And after they had held their peace, James answered, saying, Men and brethren, hearken unto me: Simeon hath declared how God at the first did visit the Gentiles, to take out of them a people for his name. And to this agree the words of the prophets; as it is written, After this I will return, and will build again the tabernacle of David, which is fallen down; and I will build again the ruins thereof, and I will set it up: That the residue of men might seek after the Lord, and all the Gentiles, upon whom my name is called, saith the Lord, who doeth all these things. Known unto God are all his works from the beginning of the world. Wherefore my sentence is, that we trouble not them, which from among the Gentiles are turned to God: But that we write unto them, that they abstain from pollutions of idols, and from fornication, and from things strangled, and from blood.” ~ Acts 15:13-20

1. By listening to Peter’s account of the Holy Ghost’s work with the gentiles, James interpreted the principle taught in prophecy to agree with the Holy Ghost’s actions in people’s lives. He had to forsake his own understanding to do this!

2. What he required of the gentiles really had nothing to do with the Mosaic law as much as it did with clearly separating the gentiles from partaking in any form of pagan worship. His burden was “come out from among them and be ye separate.” Not “you must be like the Jewish group.” ( Sometimes we have mixed these two statements up today. The second statement is not biblical because we must all be like the Spirit of Christ, not like any one group. )

3. James was a minister of sacrificial love! As a key leader of the Christian Jews, he personally identified with this decision so his flock would clearly understand the direction God wanted. James did not operate like a local politician. Persecution was bad enough since the Jews believed in Christ as the promised Messiah. But to allow people to claim to be a child of God without the law was serious blasphemy to the rest of the unbelieving Jews! James was risking the safety of all Jewish believers! Although he had the safety of the local flock at heart, he valued the will of God above the safety of himself and the flock he was responsible for. He was willing to sacrifice his own safety for the greater good of the whole body, and to glorify the purpose of Christ: “Holy Father, keep through thine own name those whom thou hast given me, that they may be one, as we are.” ( John 17:11 )

“O the depth of the riches both of the wisdom and knowledge of God! how unsearchable are his judgments, and his ways past finding out! For who hath known the mind of the Lord? or who hath been his counsellor?” ~ Romans 11:33-34

And so I conclude with my original question, because I really want to know!

Do you desire an Acts 15 minister’s meeting?

It is time again to “tear down the walls!” The only legitimate walls are walls of salvation, and only the blood of Christ can produce that wall. I believe it is time for every saint to pray earnestly everywhere for every wall between God’s true people to fall! If we earnestly desire it, no man can stand in the way of the will of God!

The spiritual silence will never be broken by the great revival of Revelation 8, unless we first all gather together in one accord, at one altar of sacrifice. How will that ever happen if we never follow the pattern taught us in Acts 15? Let us get back to all the Bible, including that which is particularly for the ministry to follow and obey. Unity is the difficult part that too many have simply given up on.

How much more liberty does wickedness get to have before we “wake up” to our responsibility to lead the people into the spiritual maturity it takes to stay in fellowship?

“And I, brethren, could not speak unto you as unto spiritual, but as unto carnal, even as unto babes in Christ. I have fed you with milk, and not with meat: for hitherto ye were not able to bear it, neither yet now are ye able. For ye are yet carnal: for whereas there is among you envying, and strife, and divisions, are ye not carnal, and walk as men?” ~ 1 Corinthians 3:1-3

A divided people will not survive what is ahead! We either learn to follow the Holy Spirit all the way, or we will disintegrate into non existence. God wants a holy and unified people he can be glorified through to bring about his final revival!

Are we going to continue to be part of the problem? Or are we humble and willing enough to be a part of the answer to Jesus’ earnest prayer: “that they may be one, as we are”? May the Holy Spirit have his way with us all!