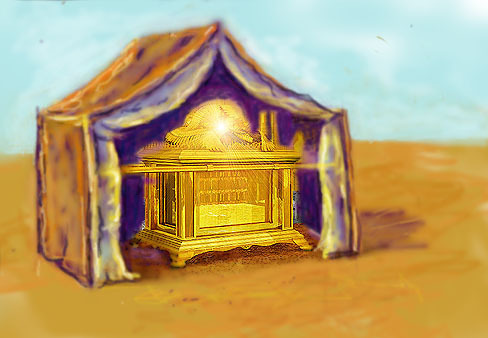 God has always had his particular people, that he has called to belong to him, and serve him. This is the way man was created from the beginning. But because man fell, ever since, God has had to deliver, cleanse, and separate his people to himself, over and over again throughout history.

God called and chose Noah to build an ark, so he could separate his family from the destruction that was coming upon all sinful mankind.

God later called Abram into a new promised land. And in doing so, he also changed who Abram was, to Abraham, the father of many nations. And Abraham became the father of the lineage of the faithful, God’s chosen people.

Later, God had to call Jacob back to the promised land, and as he did, he also broke Jacob and changed who he was. And so Jacob became Israel, and his 12 sons became the 12 tribes of Israel. God’s chosen people.

And then later God called Moses, to again call the 12 tribes of Israel out of Egypt, to return again to the promised land. And when he called them, he called them to himself, to be his people, not just any people.

God has always determined, since the very creation, to have a people who are like him in holiness and truth. And so after he took them out of Egypt, he instructed them in the way of holiness.

“For thou art an holy people unto the Lord thy God, and the Lord hath chosen thee to be a peculiar people unto himself, above all the nations that are upon the earth.” ~ Deuteronomy 14:2

That word “peculiar” in the original means “special treasure”. Meaning that they are different from other people, and because of that they are of special value to God. And this is especially what he determined to do through his son Jesus Christ.

“Who gave himself for us, that he might redeem us from all iniquity, and purify unto himself a peculiar people, zealous of good works.” ~ Titus 2:14

So when we answer the call of God to repent of sin and forsake the evil way, we then are chosen for a very special purpose!

“But ye are a chosen generation, a royal priesthood, an holy nation, a peculiar people; that ye should shew forth the praises of him who hath called you out of darkness into his marvellous light: Which in time past were not a people, but are now the people of God: which had not obtained mercy, but now have obtained mercy. Dearly beloved, I beseech you as strangers and pilgrims, abstain from fleshly lusts, which war against the soul” ~ 1 Peter 2:9-11

Sin and hypocrisy will cause us to be scattered and forsaken. And if we continue in hypocrisy, God will turn us over to a lie. And we will be gathered into one of the modern day churches, where sin and ungodliness remains within the hearts of the people there. And we will be lost.

But when we turn away from the way of sin and hypocrisy, then we can turn towards the Lord. And he will hear us, and gather us to himself.

“Behold, I will gather them out of all countries, whither I have driven them in mine anger, and in my fury, and in great wrath; and I will bring them again unto this place, and I will cause them to dwell safely: And they shall be my people, and I will be their God: And I will give them one heart, and one way, that they may fear me for ever, for the good of them, and of their children after them: And I will make an everlasting covenant with them, that I will not turn away from them, to do them good; but I will put my fear in their hearts, that they shall not depart from me.” ~ Jeremiah 32:37-40

Of necessity, for us to become his special people, we must have a new heart, and a new spirit. One that has a respectful fear for God and his commandments. This was even prophesied in the Old Testament as the plan of God for his people.

“And I will give them one heart, and I will put a new spirit within you; and I will take the stony heart out of their flesh, and will give them an heart of flesh: That they may walk in my statutes, and keep mine ordinances, and do them: and they shall be my people, and I will be their God.” ~ Ezekiel 11:19-20

Modern-day false doctrines are teaching that you can continue with the same old stony, sinful heart. And that you can keep your old fleshly, lustful spirit, and God will still accept you. But that was never true in the Old Testament, and that is especially not true in the New Testament.

And in the New Testament, God opened up the door beyond the Israelites, to allow the gentiles to also be part of his special people, without having to follow the Mosaic Law. James, the overseer leader of the Jewish Christians, expressed how God was doing this.

“Simeon hath declared how God at the first did visit the Gentiles, to take out of them a people for his name. And to this agree the words of the prophets; as it is written, After this I will return, and will build again the tabernacle of David, which is fallen down; and I will build again the ruins thereof, and I will set it up: That the residue of men might seek after the Lord, and all the Gentiles, upon whom my name is called, saith the Lord, who doeth all these things.” ~ Acts 15:14-17

The two room Tabernacle of the Old Testament that originally contained the ark, was closed. And only certain people were allowed to go into it. The Tabernacle of David, on the other hand, was a one-room tent, containing only the ark. And it was left open.

The ark was the sacred place where God’s presence would come down to meet with the people. And this Tabernacle of David was left wide-open to allow all to see into it. David did it this way so that they could worship, and appoint people to constantly give praise before God.

“[1] So they brought the ark of God, and set it in the midst of the tent that David had pitched for it: and they offered burnt sacrifices and peace offerings before God. [4] And he appointed certain of the Levites to minister before the ark of the Lord, and to record, and to thank and praise the Lord God of Israel: [6] Benaiah also and Jahaziel the priests with trumpets continually before the ark of the covenant of God.” ~ 1 Chronicles 16:1,4,6

James’ statement used the example of the Tabernacle of David to show that the way of salvation, the way to become God’s people, had been opened up to everyone who will answer the call.

Through Christ, God removed the partition of the wall that separated between the Jews and the gentiles, so that both together could become his special people. Everyone who answers the call of Jesus Christ upon their lives.

In his epistle to the Ephesian gentiles, the Apostle Paul also wrote about this change that opened up the way.

“That at that time ye were without Christ, being aliens from the commonwealth of Israel, and strangers from the covenants of promise, having no hope, and without God in the world: But now in Christ Jesus ye who sometimes were far off are made nigh by the blood of Christ. For he is our peace, who hath made both one, and hath broken down the middle wall of partition between us; Having abolished in his flesh the enmity, even the law of commandments contained in ordinances; for to make in himself of twain one new man, so making peace; And that he might reconcile both unto God in one body by the cross, having slain the enmity thereby: And came and preached peace to you which were afar off, and to them that were nigh. For through him we both have access by one Spirit unto the Father. Now therefore ye are no more strangers and foreigners, but fellowcitizens with the saints, and of the household of God” ~ Ephesians 2:12-19

Spiritually and symbolically, the book of Revelation also shows us a vision of this Tabernacle of David, where all the redeemed have the same access to worship in God’s presence.

“And the temple of God was opened in heaven, and there was seen in his temple the ark of his testament: and there were lightnings, and voices, and thunderings, and an earthquake, and great hail.” ~ Revelation 11:19

In the presence of God there is great light, and much worship. And this produces judgment upon false Christian churches that are full of hypocrisy. Modern corrupt churches worship as if God is very far away, and almost non-existent. Consequently they have no fear of God, and they continue to live with sinful desires within their heart. Therefore the vision from this open temple in Revelation, there is also seen and felt: thunderings, and an earthquake, and great hail.

The place of God’s true people is never to include a greater mixture of people with idols in their hearts. People who value the things of this life, more than God and his calling on their life.

“And what agreement hath the temple of God with idols? for ye are the temple of the living God; as God hath said, I will dwell in them, and walk in them; and I will be their God, and they shall be my people.” ~ 2 Corinthians 6:16

When all the confusion of spiritual hypocrisy has been removed by the book of Revelation, then in the final chapters it states:

“And I heard a great voice out of heaven saying, Behold, the tabernacle of God is with men, and he will dwell with them, and they shall be his people, and God himself shall be with them, and be their God.” ~ Revelation 21:3