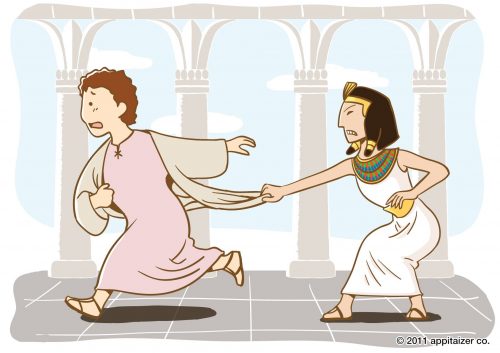 Today we will look at three examples from the Bible that teach us important lessons about temptation and how we can be victorious over temptation in our own lives.  Our first example is about a young man named Joseph.  Joseph’s story is documented in the book of Genesis.  Joseph is one of the two youngest sons of Jacob, and he was about 17 years old at the time of this story. Joseph’s brothers were jealous of the love their father had for him.  Because of this jealousy, his brothers hated him, and they sought to do Joseph harm.  Eventually, Joseph’s brothers sold him into slavery to a man named Potiphar.

At the beginning of Genesis chapter 39, we read that Joseph’s brothers treated him cruelly because they were incredibly jealous of their father’s love for him.  So the brothers plotted to kill Joseph but instead sold him to an Egyptian household as a slave.  God did not abandon Joseph but had his hand on him, and Joseph quickly advanced in the house of Potiphar.  Joseph feared God, and God was with him.   So instead of keeping him as a mere slave, Potiphar made him his steward and overseer of his whole house.

What did Joseph do when this temptation came at its strongest?  He not only refused her, but he fled from her as he would have done as if someone were trying to kill him.  Joseph escaped for his life!  This behavior of Joseph, without doubt, is recorded for the instruction of all.  It is our duty to avoid the things that are themselves sinful and those that lead to sin.  Any sin we commit is evil and separates us from God.

Before we sin, there is always a temptation.  A temptation is not a sin, but it is the testing point for sin.  Joseph did not know that his boss’s wife would tempt him, but if he had given in and not fled, he would have sinned.  What do we do when temptation meets us?  Are we fleeing from the wrong, or are we giving in? What happens when the temptation to lie, get angry or do anything that transgresses God’s commandments challenges us?

Our second example is about a man named Achan, whose story we can find in the book of Joshua.  Before the Israelites would conquer Jericho, God commanded them not to take specific items of the spoils because they were accursed.  Achan was tempted in Jericho by things he’d seen and then desired to have, which God said not to take.  Achan took the accursed items anyway and hid them in his tent.  God became very angry, and Achan’s action became responsible for the defeat against the Israelites when Joshua sent the men into Ai.  God told Joshua there was sin among the Israelites, and Achan finally confessed.

How have you been doing in your life?  Have you been letting temptations lead you to sin?  If you have, God has given the power through His Son to defeat and overcome the temptation.  When we get saved and stay close to God, we can flee whenever the temptation arises.